We have classified the subjects and ordered the chapters in a way that makes it possible for the book to introduce the biography of our Master and Sufism at the same time, following events in their chronological order as much as possible. We have compiled in this biography information about the various stages of his life and his diverse activities. This should give the reader a reasonably complete picture of his life, with its many challenges, sufferings, and achievements; with events that brought happiness and others that filled the heart with sadness. This biography has not confined itself to the history of our Shaikh after becoming the Master of Ṭarīqa at the age of forty, but we have also followed the different stages of his earlier life. We have also covered events that predated his birth that are relevant to studying his life. One thing that this comprehensive biography shows is the fundamental changes that happened to the character, personality, behaviour, and interests of our Shaikh after assuming the Shaikhdom of Ṭarīqa. After a life occupied by worldly interests — although Ṭarīqa still played a role in it, as he was the son of its Master and one of its dervishes — becoming the Shaikh of Ṭarīqa made the Ṭarīqa his first concern and calling people to Allah his main activity.

This is a brief overview of the contents of the book.

Chapter one introduces the concept of “Ṭarīqa” in the thought of Shaikh Muḥammad al-Muḥammad al-Kasnazān. It refers to the Qur’an and the life of the Prophet (PBUH), showing that Ṭarīqa is the “spiritual side of Islam”, as our Master describes it. Chapter two focuses on the Ṭarīqa of our Shaikh, Ṭarīqa ʿAliyya Qādiriyya Kasnazāniyya, introducing its main Shaikhs. Due to the major role that karāmas play in the lives of the Shaikhs of Ṭarīqa, we have dedicated chapter three to introducing these paranormal feats that Allah honours his close servants with.

After these chapters that explain major Sufi concepts, the book focuses on the life of our Shaikh. Chapter four is about his noble pedigree, which goes back to the Messenger of Allah, Muḥammad (PBUH) from both parental sides. It also introduces the history of the Barzinjī sayyids in the north of Iraq to which he belongs. After chapter two’s brief introduction to our Master’s father, Shaikh ʿAbd al-Karīm al-Kasnazān, whom we learn more about in later chapters, chapter five discusses the spiritual home environment in which our Shaikh was brought up. The chapter gives special attention to the character and personality of his mother, Ḥafṣa, and her role as the wife of the Master of Ṭarīqa.

Shaikh Muḥammad al-Muḥammad was fond of studying from his childhood, so much so that his life is a continuous journey of learning. This is the subject of chapter six, which discusses his schooling and self-education. The Shaikhs of Ṭarīqa Kasnazāniyya have a long history of resisting injustice and aggression and defending the rights of the weak and oppressed. Our Shaikh spent around six years, 1961-1966, defending the rights of the Kurdish minority in the north of Iraq. This is discussed in detail in chapter seven. Chapter eight introduces the wife of our Shaikh and his children.

The Masterhood of Ṭarīqa represents spiritual succession to the Prophet (PBUH), not mere excellence at Islam’s textual and intellectual sciences, which is why it is determined by Allah. After expounding how becoming a Shaikh of Ṭarīqa is an act of divine election, not human acquisition, chapter nine presents the history of electing Shaikh Muḥammad al-Muḥammad as Master of Ṭarīqa, succeeding his father Shaikh ʿAbd al-Karīm al-Kasnazān. Chapter ten continues this subject by detailing how he assumed the Shaikhdom of Ṭarīqa after Shaikh ʿAbd al-Karīm. It also recounts some of the karāmas that show his spiritual inheritance of the Prophet (PBUH). Being the representative of the Prophet (PBUH), the Shaikh of Ṭarīqa emulates the character of the Prophet (PBUH) and acquires his beautiful attributes. Chapter eleven focuses on describing the Muḥammadan traits of Shaikh Muḥammad al-Muḥammad al-Kasnazān, including his leadership qualities.

Our Shaikh considers calling people to Allah the greatest form of worship because causing Allah to love people and people to love Allah is the greatest of good deeds. Chapter twelve sheds light on his monumental preaching achievements throughout the world. The concept of “takya”, which is the place of worship, learning, and meeting of the dervishes of Ṭarīqa, is then discussed in chapter thirteen. It explains our Master’s exceptional efforts in establishing takyas in various parts of the world. Chapter fourteen first explains the importance of “dhikr” (remembrance of Allah) in the Ṭarīqa, before focusing on the changes made by Shaikh Muḥammad al-Muḥammad to the various dhikrs of Ṭarīqa Kasnazāniyya.

Chapter fifteen explains “riyāḍa” (spiritual exercising) in the Ṭarīqa and our Master’s practice of it. Chapter sixteen then describes “khalwa” (solitude), the khalwas that he practised, and some of the spiritual experiences that he had when he was in solitude. The Ṭarīqa suffered considerable oppression by the Iraqi regime in the 1990s, which ultimately forced our Shaikh to emigrate from Baghdad to Sulaymāniyya, which he also had to leave later. This is the subject of chapter seventeen.

Chapter eighteen covers the religious, cultural, and social achievements and contributions of our Shaikh that were not covered in the previous chapters, such as the renovation of holy places. Chapter nineteen covers our Master’s various interests, such as reading and collecting Sufi books and manuscripts. The last chapter is followed by a short epilogue.

Appendix A is a table showing major events in the life of Shaikh Muḥammad al-Muḥammad al-Kasnazān, listed in chronological order. Appendix B is a glossary of translated and untranslated technical and other important terms used in the book. 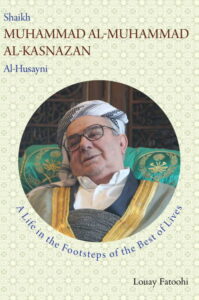